The £5,000 award was presented at a ceremony at The London Library on Thursday 7th December.

Elif Shafak praised the “diverse, powerful and utterly exciting” shortlist and said:  “I salute Rooney’s intelligent prose, lucid style, and fierce intensity – all of which will stay with the readers even long after they have finished reading this wonderful book.” 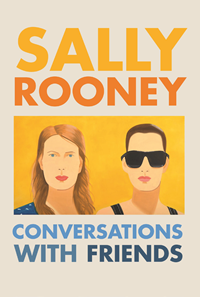 Commenting on the winning book, Lucy Hughes-Hallett said it “stood out for its glittering intelligence, its formal elegance and its capacity to grip the reader.”

Conversations with Friends has been one of the biggest debuts of 2017, with Rooney’s writing having been compared with that of JD Salinger and Bret Easton Ellis. 26-year-old Rooney, born in the west of Ireland and now living in Dublin, is the first Irish winner of this prestigious award, founded in 1991, and joint youngest winner with Zadie Smith (White Teeth, 2001). Her work has appeared in Granta, The White Review, The Dublin Review, The Stinging Fly , Kevin Barry’s Stonecutter and The Winter Pages anthology.

Rooney’s debut novel was selected from an impressive shortlist of five, rather than the usual four, as a testament to the strength of submissions this year. The shortlist included Outlandish Knight – The Byzantine Life of Steven Runciman by Minoo Dinshaw (Allen Lane); The End of the Day by Claire North (Orbit); The Lucky Ones by Julianne Pachico (Faber & Faber); The Lauras by Sara Taylor (Windmill).

The award, administered by the SoA, was founded in 1991 and has since accumulated an exceptional list of alumni – winners who have had great successes in contemporary literature.

Generously sponsored by literary agency Peters Fraser + Dunlop, the prize is awarded annually to the best work of fiction, non-fiction or poetry by a British or Irish author aged between 18 and 35, either published or self-published, and has gained attention and acclaim across the publishing industry and press for its uncanny ability to pick future greats. £5,000 is given to the overall winner and £500 to each of the four runners-up.

The next Young Writer Award will be presented in 2018.