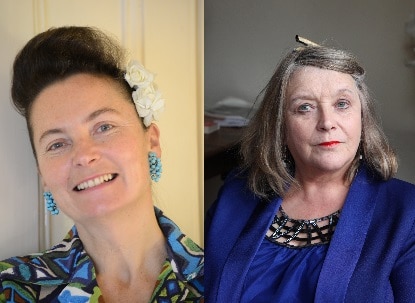 Pictured above – left to right: Katrina Naomi and Menna Elfyn

The group welcomed Katrina Naomi and Menna Elfyn on 31 January 2019 at its annual general meeting in London, which was followed by panel talks and a discussion on how to make a living as a poet, with guest poets Rachael Allen, Roy McFarlane and the group Chair, Tamar Yoseloff. Both were encouraged to join the committee to support and represent Cornwall and Wales poets and spoken word artists.

Katrina Naomi’s third full poetry collection is forthcoming from Seren in June 2020, for which she received an Authors’ Foundation award. Menna Elfyn has published fourteen collections of poetry, children’s novels, libretti for UK and US composers as well as plays for television and radio. Meet the rest of the committee.

On being part of the committee:

I’m offering to stand for the Society of Authors’ PSWG committee because I want poets to be treated fairly and to be paid for their work. I’m a former shop steward (from when I worked in human rights) and know that we can achieve more by working together than by struggling on our own. I’ve been grateful for the advice I’ve received from the Society of Authors, and from the PSWG committee, specifically over the committee’s work on festival payments, and would like to give something back. I would be interested in looking at the idea of a code of conduct for publishers, so that poets can have a good sense of which publishers treat their poets well.

I am delighted to be nominated to serve on this committee and look forward to sharing ideas on the promotion of poetry throughout the UK. As a Welsh language writer who has translated widely into English and other languages, I hope to enhance the understanding of the spoken word across language borders.

PSWG is run by an elected committee and brings together a community of poets and spoken word artists to discuss issues, offer advice and support, and raise the profile of poetry and performance.

Throughout its first year, the group held a series of events at festivals across the country on making a living as a poet – a subject that has been expanded to its annual general meetings since.

Find out more about PSWG. If you are an SoA member and would like to join the PSWG, email group secretary Nadia Bonini.