“When I visit a school I can tell if they have a great librarian long before I walk into the library. You can feel it in the enthusiasm the young people have for reading, see it on the walls in posters and certificates, and you can sense the buzz leaking out from that magical space.”

Reading is the core skill that opens up all aspects of education and we believe that reading for pleasure is the best way to build reading skills.

Every term day, children’s authors visit schools up and down the country. Sometimes we are so inspired by the work a particular school is doing that we want to give them a pat on the back and let them know that we appreciate what they are doing.

The Society’s Children’s Writers and Illustrator’s Group decided upon a simple way for members to express their joy when we come across schools and individuals who are a little bit special, and who are dedicated to promoting a love of reading.

The award, which is given immediately after authors send details, comes with window transfers, a letter and a certificate (English and Welsh – where applicable) to put in the reception or the library to let everyone know that all the hard work and dedication of the school did not go unnoticed.

“You can always tell a school where books are valued. The displays, the art, posters, competitions and incentives are one thing. But what really tells is the children. They hold books, embrace them, talk about them, make them, illustrate and write them. They know books are special….”

As a group of children’s writers and illustrators we visit thousands of schools and see a wide range of approaches to teaching literacy and encouraging reading. We all meet staff who are doing exceptional work, so we have developed an immediate way for individual authors to honour a school that has impressed them with their promotion of reading for pleasure, with a CWIG Reading for Pleasure Award.

Your award shouldn’t just be for a great visit or if you were given a wonderful lunch! If you visit lots of schools, you will know when you have come across a school that is doing that little bit more – maintaining the library at all costs, making strong links with the community library, encouraging peer-to-peer recommendations, working with reluctant readers, running book clubs or reading groups and putting on mini-festivals or literary and illustrative activities that go beyond the remit of the curriculum.

Join us in rewarding those schools that go the extra mile in encouraging children to read for pleasure.

How many awards can I give?

CWIG members can honour, via the SoA, schools with 3 awards from now until 13 August 2022.

You must have visited the school, either virtually or in person, over September 2021-July 2022.

Schools can receive more than one award from different authors.

Awards can be given to any nursery, primary, secondary or special schools throughout the world that an author has visited (either virtually or in person) during the 2021/22 school year.

Members can reward schools with an award in whatever combination they like e.g. one primary, two secondaries.

Welsh schools will receive certificates in English and Welsh.

Who is the scheme open to?

When do I submit details?

This scheme operates on a rolling basis, so members can reward schools in whatever order or timing that suits. You could spontaneously gift your award immediately after your visit when you feel really inspired; or leave your decision to the end of a term or the school year. We would prefer early nominations to sustain interest in the award throughout the year.

How do I nominate?

You will need to send us contact details along with a citation (no more than 150 words) detailing why you are presenting an award. An optional paragraph of why the school deserves the award and images would be appreciated for publicity purposes. Please complete this form. 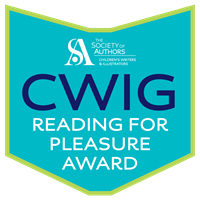 We will let you know when we have sent the school their certificate by circulating details of your award on our social media platforms – so be be sure to include your Twitter handle.

Do encourage your school to make the most of their achievement by downloading the award logo for this year to use on their official letters, newsletters and any publicity materials, including a sample press release they can send to local press. Do send a quote directly!

When tweeting about the award, please use #CWIGAward #readingforpleasure, tag @Soc_of_Authors and mention the school, librarian, staff or headteacher. If the award is given around an annual event or local festival you may like to mention that too, e.g. World Book Day, National Libraries Week etc. You can also download a flyer to send to schools.

I awarded @secondaryschool @librarian/teacher a @Soc_of_Authors #CWIGAward for developing #R4P. Congratulations, you are an inspiration!

“A stand-out school is one with: book-loving messages on classroom doors or posters; where the head teacher is talking about the value of reading for pleasure; where a variety of adults are reflecting the librarian’s enthusiasm; and where kids themselves are freely discussing books and using the library, happily, voluntarily and unselfconsciously.”

The CWIG Reading for Pleasure Award was founded to allow individual authors to give thanks and appreciation to schools and librarians that have made impressive efforts to promote reading for pleasure. Your vital work helps improve reading, writing and research skills as well as vocabulary and the ability to access reference materials.

If you have received an award, read on to find out how best to promote your achievement and download the flyer to find out more.

Who is the scheme open to?

Awards can be given to any nursery, primary, secondary or special school throughout the world. Schools can receive more than one award from different authors.

How are submissions made?

Authors have to belong to the Society of Authors and must have visited the school over the 2020/21 school year (September to July) – either virtually or in person.

Members can present awards in whatever combination they like e.g. one primary, two secondaries on a rolling basis. You may receive an award immediately after the author’s visit or find that the author has waited until the end of a term or the school year. This year’s deadline is 13 August 2021.

If you are a Welsh school you will receive Welsh and English certificates.

Do I need to do anything?

Yes! We’d really like to help you celebrate the award and promote your school and your achievement, so we encourage you to do some of the following:

Calling all parents and pupils! We’ve won a @Soc_of_Authors #CWIGAward from @authorname for our work on #readingforpleasure 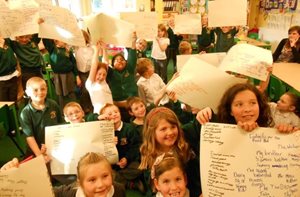 We would love you to send us images to use for the project, but any images you send us must be high resolution and fully rights cleared – that means:

Please let us have the photographer’s name so that we can give an appropriate credit whenever the photo is used.

The school clearly recognised the value of something popular and non-‘literary’ like ‘Doctor Who’ in engaging reluctant readers. Help with the visit on the day, and promotion beforehand, was invaluable. The children’s interest was very keen and genuine. 50 enthusiastic students, chosen from across the ability range, were actively involved in imaginative writing on the day. Many were very eager to share their work, and I had dozens of interested questions and a big queue for the book-signing at the end of the day.

In recognition of the pressures facing authors during the pandemic, we gave a short extension (until 7 December 2020) to members to make retrospective awards for the 2019/20 academic year. We are delighted to announce that awards went to Meersbrook Bank School, Sheffield, Kathryn White (March 2019) and Bourne Academy, Bournemouth: Alison Gardiner (December 2019).